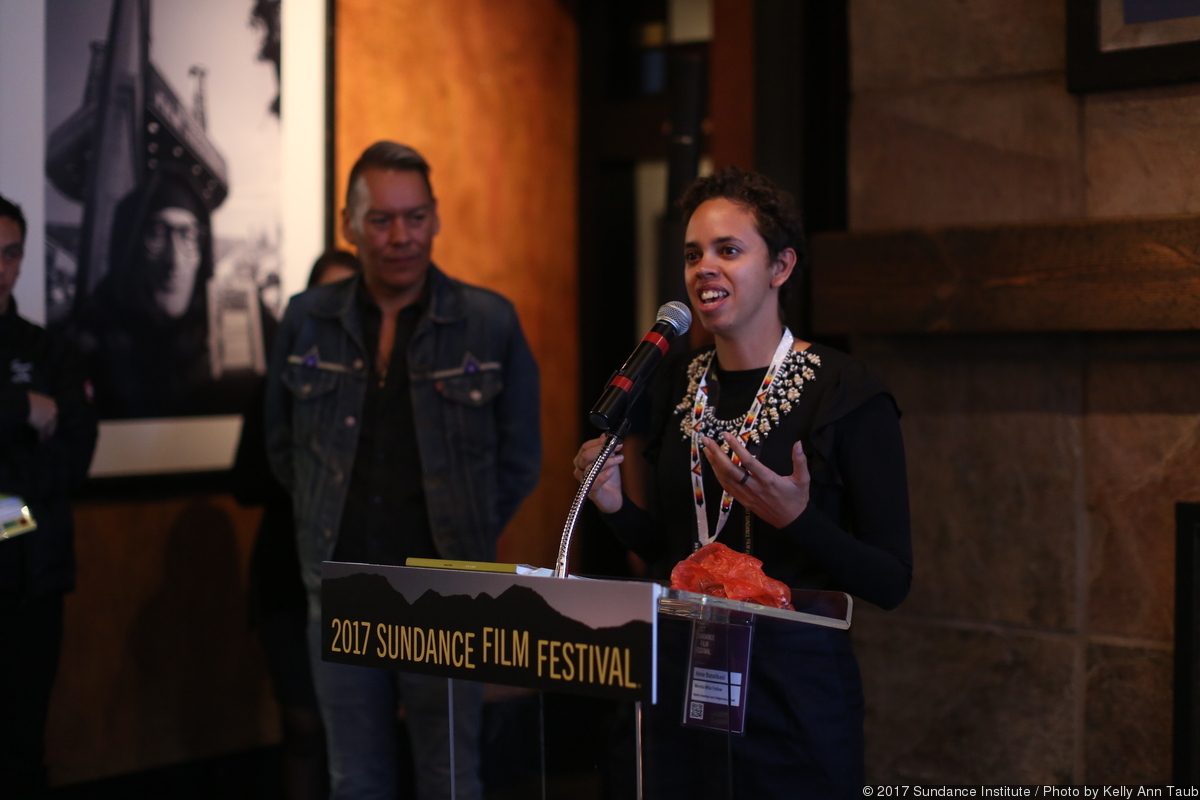 MONDAY, JANUARY 23RD, 2017
Park City, UT — Amie Batalibasi (Australian Solomon Islander, Feralimae/Kosi) from Melbourne, Australia, is the 2017 recipient of the Sundance Institute Merata Mita Fellowship—an annual fellowship named in honor of the late Māori filmmaker Merata Mita (1942-2010). The announcement was delivered today at the 2017 Sundance Film Festival.
For the second consecutive year, Sundance Institute has identified a Native or Indigenous filmmaker from a global pool of nominees to award a cash grant and provide a year-long continuum of support with activities including a trip to the Sundance Film Festival, access to strategic and creative services offered by Sundance Institute artist programs, and mentorship opportunities.Batalibasi is a writer, director and producer. Her creative practice is driven by a passion to collaborate with diverse people and communities at a grassroots level, to unearth stories that have the possibility to spark empowerment and create change. Over the last nine years, as mentor and media trainer, Batalibasi has produced dozens of short films by first-time filmmakers through collaborative community projects with children and young people, new migrant groups, remote Indigenous communities, and culturally and linguistically diverse communities in and around Melbourne, interstate Australia and in the Solomon Islands.Batalibasi’s current project is a feature adaptation of her award-winning short film, Blackbird. The story explores the little-known history of Australia’s sugar slaves by shining a light on the dark history of “blackbirding,” where from 1863-1904 approximately 60,000 Pacific Islanders were taken, often by kidnapping and coercion, to labor on the country’s sugar cane and cotton farms. Set in the decades preceding the “White Australia Policy,” the story follows Siosi, a spirited young Solomon Islander who is brutally snatched from his island home and forced to work on a Queensland cane farm. Stripped of his culture, identity and entrapped within a world of exploitation, it’s his fight for survival that ultimately seals his fate.Batalibasi graduated with honors from Melbourne University Victorian College of the Arts (VCA) in a Graduate Diploma of Film and TV (Documentary) in 2007 and a Master of Film and TV (Narrative) in 2015. Her films have screened throughout Australia and internationally.

“The Merata Mita Fellowship, which honors the memory of this noted activist, documentarian and the first and only Māori woman to write a dramatic feature, reflects Sundance Institute’s commitment to supporting Indigenous artists worldwide,” said Bird Runningwater (Cheyenne/Mescalero Apache), Director, Sundance Institute Native American and Indigenous Film Program. “Merata stood up for the voices and talent of Māori artists in New Zealand’s film and television industry where she saw a notable underrepresentation and misrepresentation of her community’s stories. We are so impressed by the talent of Amie Batalibasi and feel that she is the perfect selection to carry on the creative work and mission that Merata began. We are extremely proud to continue Merata’s efforts with this Fellowship, which pays tribute to her immense contributions and passes along her spirit to a new generation of Indigenous artists such as Amie.”

Sundance Institute’s Native American and Indigenous Program champions Native American and Indigenous independent storytelling artists through residency Labs, Fellowships, public programming, and a year-round continuum of creative, financial, and tactical support. The Program conducts outreach and education to identify a new generation of Native and Indigenous voices, connecting them with opportunities to develop their storytelling projects, and bringing them and their work back to Native lands. At its core, the Program seeks to inspire self-determination among Native filmmakers and communities by centering Native people in telling their own stories.

Sundance Institute
Founded in 1981 by Robert Redford, Sundance Institute is a nonprofit organization that provides and preserves the space for artists in film, theatre, and new media to create and thrive. The Institute’s signature Labs, granting, and mentorship programs, dedicated to developing new work, take place throughout the year in the U.S. and internationally. The Sundance Film Festival and other public programs connect audiences to artists in igniting new ideas, discovering original voices, and building a community dedicated to independent storytelling. Sundance Institute has supported such projects as Beasts of the Southern Wild, Fruitvale Station, Sin Nombre, The Invisible War, The Square, Dirty Wars, Spring Awakening, A Gentleman’s Guide to Love and Murder and Fun Home. Join Sundance Institute on Facebook, Instagram, Twitter and YouTube.